New technologies are leading to sports clubs launching ambitious fan activation ideas as they seek to expand their customer base and tap into new revenue streams. This article looks at four of the most effective ways of doing it.

For sports clubs seeking to connect with a changing fan base, well-executed fan activation ideas are a powerful way of driving both engagement and revenue.

Yet, creating a successful idea can be difficult.

If you’re a sports marketer, you’ll have seen first-hand the challenges that come with this task, including:

As frustrating as these obstacles are, sports organizations must still continuously come up with new and inventive ways to appeal to younger generations of fans, or risk losing them forever.

For generations, teams have relied on parents passing their love of sports to their children. Nowadays, kids have a computer in their pocket which connects them to seemingly endless alternative forms of entertainment.

As Tim Ellis, the chief marketing officer of the NFL said to the New York Times, “What we know is that if you don’t acquire a fan by the time they’re 18, you’re most likely never going to get them.”

More and more, sports organizations are coming up with ambitious fan projects with the help of the latest tech innovation and creative thinking.

Put together, they can be a winning formula that redefines what the fan experience is and satisfies new generations of fans that demand varied entertainment options and round-the-clock-engagement.

What are fan activation ideas?

Fan activation ideas, or fan projects, are a broad church that covers any activity that makes the fan feel so “animated” that they feel they are part of the live event.

By encouraging them to participate, a good fan project makes fans feel seen and heard, strengthens the bond between them and the team, and increases the chances of them coming back for more.

Fan projects are not new inventions. Anyone who’s seen the huge card displays common among soccer crowds over the years will have seen an effective fan activation idea in play.

Like these initiatives of years gone by, modern fan projects require detailed planning and excellent organizational skills, but now sports marketers have the digital tools and communication methods to step up their game.

In an industry as fast-paced as events on the field or court, it’s crucial that sports marketers don’t get left behind.

Now’s the time to step up.

If you’re tasked with creating and executing effective fan projects, then it’s important that they tick several boxes.

To sum up, the best fan activation ideas must:

With these criteria in mind, here are four innovative ideas that can inspire sports marketers to take their campaigns to the next level.

Stuck for time and resources when it comes to creating content? Solution: get the fans to do it for you.

Savvy brands are harnessing the power of social media to come up with clever marketing campaigns that center on the fan as an individual. They know that the social media generation is comfortable being in the limelight and well-versed in producing engaging content designed to attract likes.

A UGC campaign is a clever way of piggy-backing on these skills to boost brand exposure and revenue while making the fan feel part of a social movement. Research by UGC platform TINT also shows that 62% of consumers are more likely to click on content that features customers, rather than a brand-created image.

Take INDOGGO. Snoop Dogg’s gin brand knew that many of its customers were football fans, as well as regular social media users.

Their #INDOGGOSWEEPS campaign ticked both boxes.

For a chance to win a pair of tickets to the 2022 Super Bowl, fans had to follow the brand’s Instagram account, post a photo of themselves with a bottle of INDOGGO along with the campaign’s hashtag. The competition garnered a huge response from eager fans at a minimal cost.

Sports marketers can easily replicate this idea by asking fans to pose with anything club-related, be it an official jersey or a photo of a club legend.

In one stroke, the campaign has the power to boost the club’s social media following, generate low-cost publicity, and make supporters feel involved ‒ especially the lucky winners.

AR-powered photo booths are a key example. Via interactive screens, the fan chooses which sports star they would like to take a virtual selfie with. In just a few steps, they have a personalized photo with their heroes, which they can then post to social media along with a special campaign hashtag. Colombian soccer team Junior de Barranquilla put this idea to action with their HeroMirror AR experience they set up in 2019. 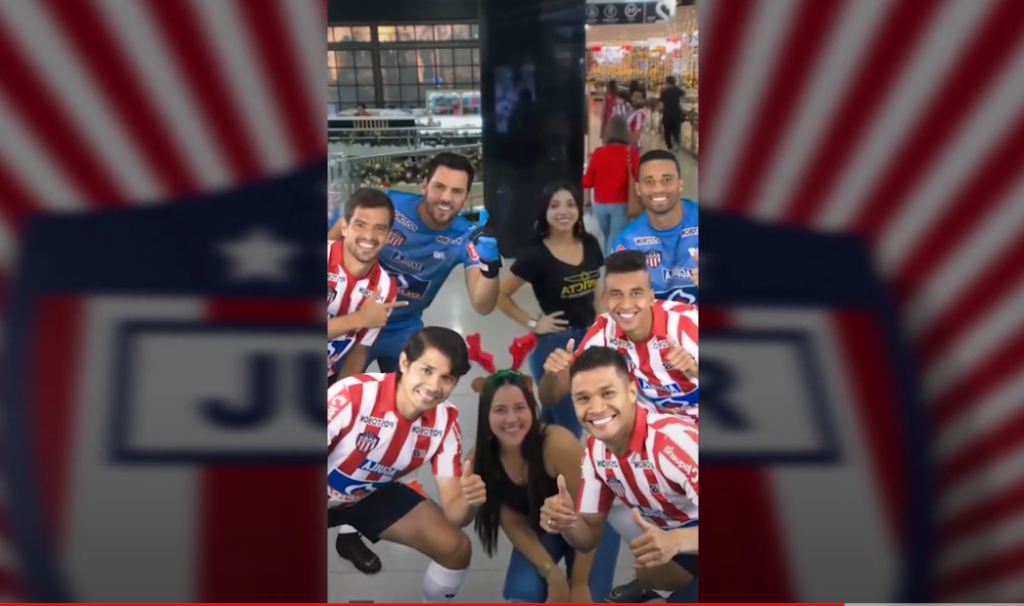 Like the INDOGGO campaign, this type of engagement brought the club easy publicity via the fan’s actions, but it also rewarded the fan with something they’ll remember: a lifelike snapshot of them with their heroes.

For older fans, the thrill and intensity of a live game is probably the reason they love sports in the first place. Gen Z fans, meanwhile, are less dependent on the live experience, and more likely to engage with online gaming. 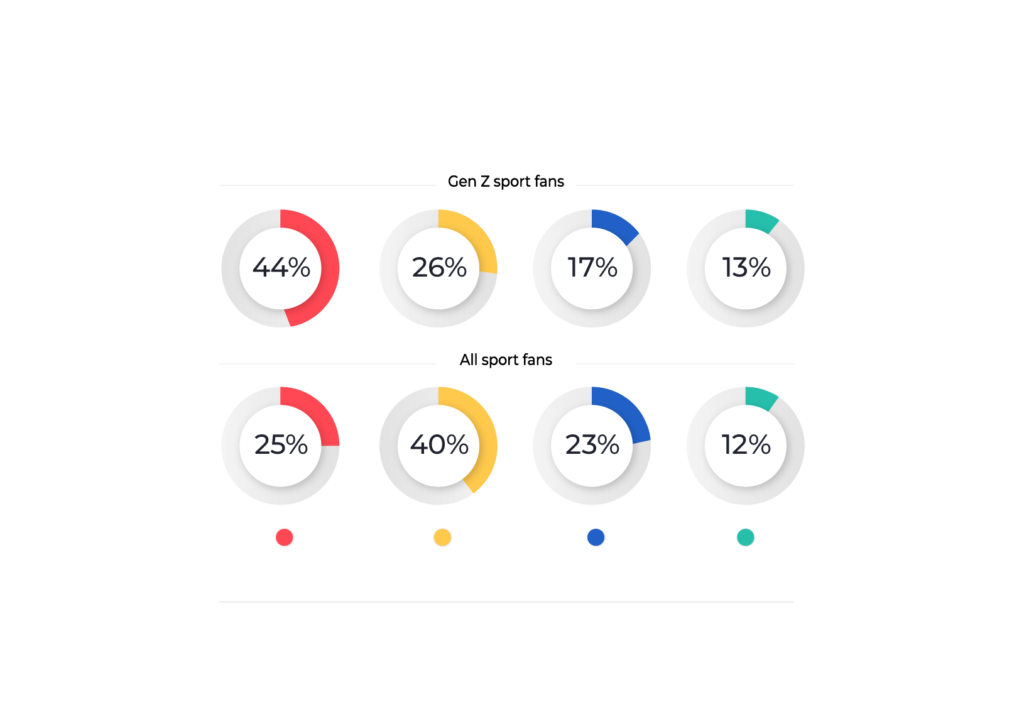 This is where clubs can take advantage of play-to-earn gamification. Encouraging fans to compete against other fans for rewards is a surefire way of accelerating engagement.

From a psychological viewpoint, the promise of a reward for successfully completing a gaming challenge is a powerful motivating tool in getting people to repeat a certain behavior.

The marketing team of ice hockey outfit Toronto Maple Leafs knew this when they launched their in-house game Dangle & Dash.

Available via the club’s app, it challenged fans to navigate their avatar through an ice rink crowded with obstacles: the longer they lasted, the more points they got. Players competed for bragging rights among their peers, and had a way of connecting with their passion outside of matchday. The club, meanwhile, benefited from the exposure the game generated.

The Paris 2024 Olympics Committee has used gamification for different reasons, which were just as effective.

Their membership program has brought together almost half a million runners from all over the world together to compete in a series of virtual challenges. For taking part, they earned points, which they could exchange in return for prizes, from small gifts all the way up to competing in the official Olympics marathon.

Not only did this serve as a motivating tool to help people get fit, it created a vibrant online community where users could feel included and valued.

If you’re a sports marketer, you can easily emulate these ideas using present-day communication tools.

Club apps and fan engagement platforms are perfect tools for hosting gamified challenges where players can notch up points tallies and compare them with their peers. Fan platforms in particular make ideal activity hubs where users can post their scores to social media, compete on fan leaderboards, and unlock special prizes in exchange for points.

Web 3 technology brings opportunities to digitize a host of club-related activities, so fans can virtually interact with the club, athletes and fellow fans 24/7.

Many sports organizations are taking the step into the metaverse, the virtual space where users can use digital avatars to chat, play and compete with each other.

English soccer club Manchester City, for example, is working with Sony to build its own metaverse. Part of this will be a digital recreation of the club’s Etihad stadium where fans can explore and take part in activities hosted by an in-built fan rewards program. 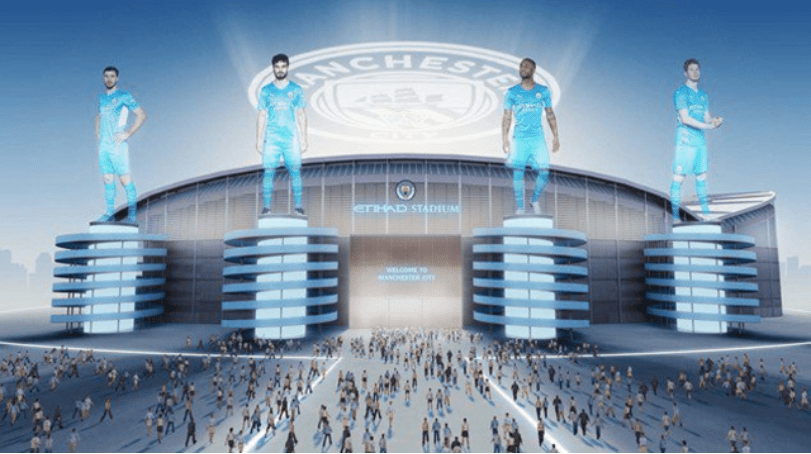 The cyber venture follows the launch of a club crypto token last year, which supporters can buy to access the metaverse, as well as have a say in club events and enter special prize draws.

French Soccer side Troyes (ESTAC), meanwhile, are using the power of NFTs (non-fungible tokens) to raise money for charity and reward fans with something unique.

The ESTAC hybrid shirt involves a physical garment twinned with a digital equivalent in the form of an NFT. Players wore the shirt, which had a NFT-linked QR code printed on it, in their game at PSG. Following the game, the successful bidder for each shirt could scan the code to access their digital collectible.

Whether accessing the metaverse or granting NFTs to superfans, clubs now have the power to take fan projects into the virtual world for the first time, and open up a wealth of new revenue streams.

Fan clubs, loyalty programs, and VIP lists have long been a key part of sports marketing strategies, but today’s online platforms mean clubs can now incorporate them as part of far-reaching fan projects.

The case of the new NHL side Seattle Kraken is a prime example. Not only did the club’s management create an online membership scheme to raise revenue, but they also used it to build a new club fanbase.

Club membership experience ‘The Depths’ offers a string of benefits we often associate with such programs, including priority access to tickets and merchandise and team store discounts.

However, a clever digital marketing campaign allowed them to build up a combined social media following of well over a million people, making it one of the largest fan projects in the sport’s history.

Such projects can also be a gateway to new matchday technologies that enhance the fan experience. Radio Frequency Identification (RFID) exists in many areas of the matchday already, such as contactless ticket scanning, but organizations can also use it to power VIP perks.

One of the best ways to launch ambitious projects such as these is via a dedicated fan engagement platform.

Fanprime is an easy-to-use and customizable fan rewards system that acts as a one-stop portal for all of your club’s fan projects.

Once signed up, you’ll have the chance to:

Ready to leverage one of these fan activation ideas to wow your customer base and unlock a new world of revenue streams? Contact us to find out how you can have a Fanprime hub up and running in just a few minutes.