A wave of emerging digital platforms is showing just why fan engagement is so important to an increasingly data-driven sports industry.

When Manchester United appointed Rick McGagh as head of fan engagement in February 2022 — creating a brand new job position in the process — many of the club’s followers expressed their confusion on social media, with some going as far to ask the question ‘what is fan engagement?’

Yet for sports marketers and CMOs, the fact that the world’s biggest soccer club made this appointment came as further proof of why fan engagement is important in today’s sports industry, and just how it’s become a central pillar in top sports clubs’ marketing strategies to access digital fanbases.

In United’s case, the head of fan engagement role has partly come about due to the club’s huge overseas fanbase, and an area of McGagh’s remit is to strengthen the club’s relationship with non-UK fans: people who can’t attend live games but still want to interact with the club.

What is fan engagement?

So, what is fan engagement, and what does it mean not just for Manchester United, but every sports organization in today’s digitized world?

According to research from Deloitte, we can split the modern fan engagement professionals’ objectives into five core tenets:

One of the vehicles that more and more sports clubs are using to adjust to these new demands are fan engagement platforms that support direct-to-fan rewards programs.

Built as white-label web solutions, they give sports firms a direct line to their supporter base, allow them to capture first-party fan data via monetized online interactions, and open up important new revenue streams in the process.

Fans, in return, get 24/7 access to a product that feels like their stake in the club, and receive rewards each time they interact.

These platforms typically operate on a points-based system. Users receive points for every online interaction they make through social media and digital platforms, which they can exchange for rewards like special discounts and unique fan experiences. This fosters a positive feedback loop between club and fan that provides both parties with benefits previously out-of-reach in the pre-digital era.

Fan engagement platforms are not only disrupting the status quo of sports marketing right now, but they’re about to define what fan engagement is for many years to come. 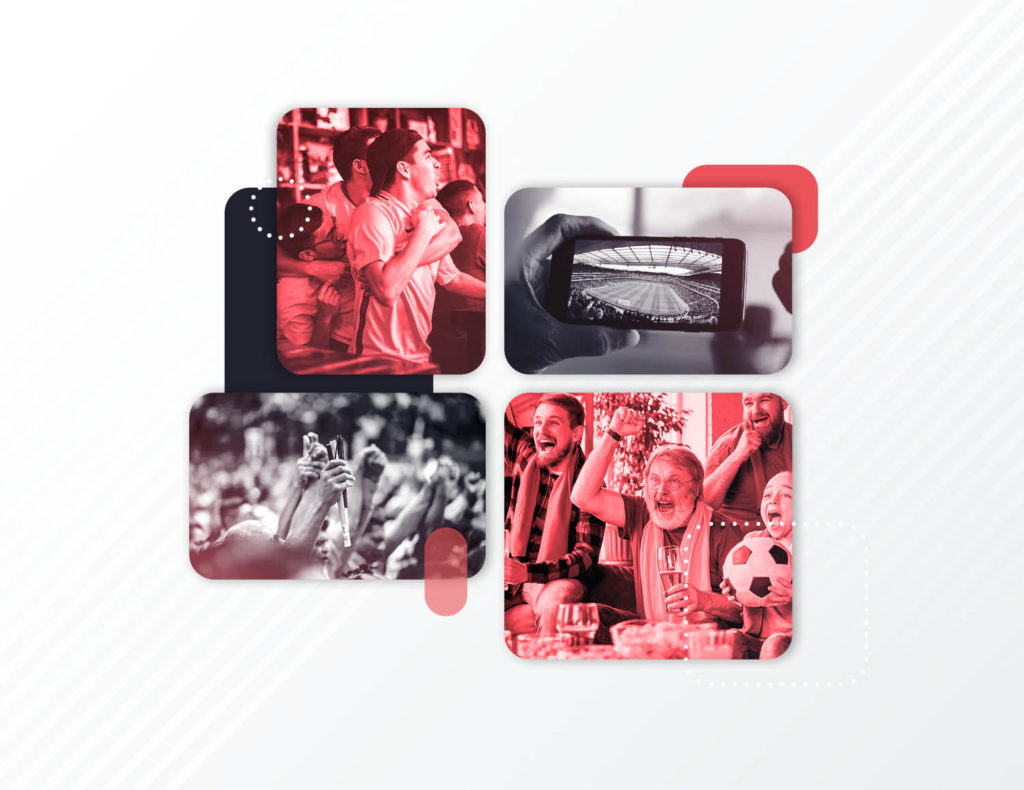 1. Cut straight through to fans

In the past, club-fan communication was limited to mostly one-way interactions. The club sold the fan a ticket, and maybe some merchandise, in return for the sporting event.

The arrival of the internet widened the scope of club marketing to an extent: fans could interact with the club via social media and take part in polls and surveys so the club could gauge an idea of what they wanted.

The two parties were kept at arm’s length, however, by intermediaries like social networks, who kept key fan data for their own purposes.

Fan rewards programs, in contrast, give both parties the opportunity to cut out the middle person. The club designs its own program for fans to access directly. Then once the fan signs up, the platform’s extensive interface automatically captures key fan data in several ways, namely by:

But what do the fans get in return?

Their very own personalized sports club gateway, complete with offers and rewards tailored to them. It gives them their own unique slice of their beloved club, as well as bragging rights among their fellow supporters.

The sporting business’ most loyal fans are the lifeblood of a club or organization.

They’re the ones who will turn up to matches when times are tough or buy the latest replica shirt every year. Yet until recently, clubs had to make an inordinate effort to record and view their contribution, via clumsy spreadsheets or paper records.

What’s more, fans were rarely rewarded for their efforts, making their passion a kind of unrequited love for them.

Direct-to-fan rewards programs solve these twin problems at a stroke. First, tracking online fan interactions allows sports marketers to see who their ‘whales’ are — let’s say the top 5% bracket of superfans — and open up a two-way communication channel with them.

Through this, they can upsell exclusive memorabilia, merchandise and ticket offers, as well offer ‘money-can’t-buy’ experiences with redeemable points to superfans, rewards that are out of reach for the average supporter.

In return, superfans get to feel like club insiders. They might get to see a new replica shirt before their peers, or be among the first to own a club token. The result is a positive feedback loop where they’re incentivized to continue interacting with the club.

Other fans, envious of these rewards, will feel motivated to join this exclusive club of supporters by increasing their own online interactions, creating a kind of snowball effect.

[Are you looking to open up a direct channel to your club’s superfans? Get in touch with Fanprime, and our team of experts will tell you how you can build a direct-to-fan reward program that allows your club to cash in on superfan online interactions and establish new, long-lasting revenue streams.]

How do clubs build brand loyalty? We can break this answer down into three areas:

Digital direct-to-fan rewards programs are a simple way of combining all three actions into one package.

They allow clubs to offer an online fan community, something sacred to sports which we see demonstrated through collective symbols such as flags and songs. Here they can consume content and interact with fellow fans and feel part of a community that might otherwise be out-of-reach, particularly to fans living abroad.

Fans have access to exclusive rewards and products through this community: the very best the club can offer. This engenders a feeling of privilege, that being part of this community is something to cherish, something that makes followers the envy of their peers, particularly through being part of an exclusive tier of membership, such as a VIP Club or Hall of Fans.

When you marry these three concepts together, you get something very powerful: a strong sense of identity among fans, which fosters continued loyalty and keeps fans around when events aren’t going too well on the pitch or court.

Many sports clubs feel hemmed in by expensive marketing campaigns that generate a low ROI: third-party agencies often muddy the message they want to convey to their fans, or social networks use unreliable algorithms that don’t get the best results.

Instead of old-school marketing campaigns that some fans might not even see, fan platforms allow clubs to beam products and services to thousands of fans’ devices in an instant. On top of that, they give them the ability to monetize every fan interaction through awarding points that can be exchanged for rewards, creating a rewards/revenue loop.

Sponsors, too, find these opportunities enticing. Sports marketers can offer the program’s advertising reach and fan knowledge as part of sponsorship packages in return for a more lucrative deal.

Let’s take the example of Barcelona FC, its partnership with Spotify, and the huge earning opportunity the club almost missed out on.

Web 3.0 technology is here. Clubs can already use the platforms to launch special club-related NFTs and offer fans a digital stake in the club through tokenization. Individuals compete for the right to own these; they earn points for each transaction, which they then use to buy digital assets that certify their fandom.

As we delve deeper into this new world of opportunity over the coming years, clubs can scale up their rewards programs to include the latest tech developments. Launching team cryptocurrencies is likely to become easier, for example, thanks to improving blockchain technology.

Fan engagement platforms are ideally placed to take advantage of this trend, offering a virtual fan house where marketing teams are easily able to incorporate new Web 3.0 offers into the existing framework.

Fan engagement platforms may be sophisticated mechanisms operating at the vanguard of digital change, but they’re purposefully packaged into easy-to-use solutions.

Fanprime is one example of a white-label solution that uses simple APIs to collect and share fan data with your marketing team.

Taking just minutes to install and get online, it’s the quickest way to:

Ready to take your club’s marketing into a new era of digital and financial opportunities?

Contact us to find out how you can get started in just a few minutes.